DETROIT JACK AND THE DoGS 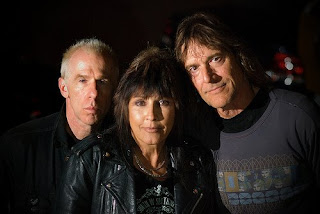 Punk goes to The Dogs

The last time a gang of degenerate Detroit punks came to Japan, they sparked a near riot, with thousands of fans storming the stage. That was at the Fuji Rock Festival this summer, and those responsible were the re-formed Stooges.

News photo
Detroit punk band The Dogs, contemporaries of The Stooges, play in Tokyo this weekend.

"I can't promise a riot," says 10-year resident of Japan Jack Waldron of the upcoming shows he has organized by The Stooges' Detroit brethren, The Dogs. "But I can promise some kick-ass energy and righteous attitude."

A power trio comprising Loren Molinaire, Mary Kay and Ron Wood (no, not that one), The Dogs formed in Lansing, Michigan in 1969, two years after Iggy Pop's Stooges.

Like MC5, with whom they have played, The Dogs' politics were as important as their music. Before John Lennon wrote his tribute, they penned "John Rock & Roll Sinclair" in homage to the poet-provocateur sentenced to 10 years in prison for giving two joints to undercover narcs.

Later, The Dogs left Michigan, and became instrumental in the punk movements of Los Angeles and New York, where they played with The Ramones.

So hard, in fact, that Waldron tracked the band down and has now put together "Doggy Style," a 28-track tribute album on his own Future Now Records label that's made up of underground Japanese punk, garage and hardcore acts. Among the local artists covering Dogs tracks are Boris, Melt-Banana, Mad 3, Gimmies and Jackie & The Cedrics (whose member Rockin' Jellybean designed the album's artwork).