Fussa Blasts Rock Outside American Base 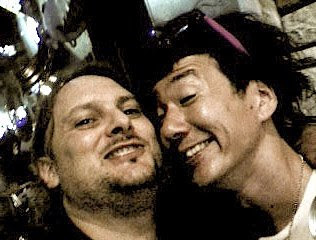 Fussa, Japan was hit by an Abnormal stealth bomb last Saturday nite! Club Eddie's was destroyed in a firestorm of rock 'n' killroy when thee Comi took the stage following the Saturn invaders outside the American military base, which rose from the ashes of the Vietnam war to breed a hybrid English speaking Japanese, who still follow the credence of sex, drugs and rock 'n' roll!

Comi crawled from the inferno in resonating fury to strike back at the grunts occupying the proscenium, thus exstinguishing howls of hail to the chief. In an onslaught unseen since the battle of Iwa jima, guitars bayonetted the front lines, eardrums burst from bomb blasts of bass riffs strafing the riotous trenches descending into hand to hand combat rock. Insignia of sculls and crossbones lay waste to an unsuspecting garage corp infantry.

Mopping up the flailing bodies beaten with Murochin sticks of obedience commanded an allegiance to a new flag, that of the Abnormals, on this day of our new lord and provider, the pirates guide and purveyor of all that shakes the ass of those who truly believe in the force of rock and roll: the twenty fifth day in the month of our Caesar, Julius, MMIX.
ABNORMALS-LIVE AT THE BUDOKAN!!


*All photos and content property of Jack Waldron (photos may not be used without written permission)
Posted by Detroit Jack at 8:23 AM