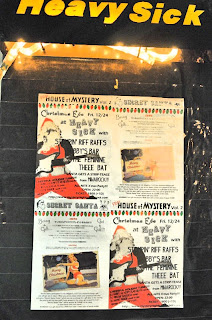 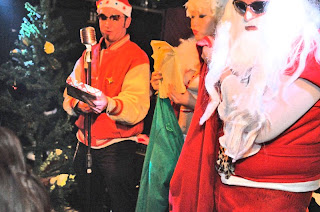 December 25
12:15 am
Children in the Hatagaya area of Tokyo reported being awaken by ruckus laughter in the early morning hours on Xmas day. Upon further inquiry, the children were confronted by a, "fat [scantily dressed] red man in dark sunglasses", who resembled Santa Claus, and, who the children described as "an almost naked Mrs. Claus". The suspect was apparently dispersing sexy gifts to the children (such as Bitch Attack eyelashes (see photo of evidence) and, stealing presents from under the Xmas trees addressed to mommy from daddy, and vis versa.


12:55 am
Other witnesses reported seeing a "Santa Love Doll character dressed in hot pants wearing a G-string and black stockings riding in his slay with a very sexy female claus", who they say was too young and sexily dressed to have been Mrs. Claus. Further, they complained that the couple appeared to be intoxicated while operating the slay, as there were some near misses when taking off and landing.


1:35 am
The suspects were then seen entering Club HEAVYSICK in the Hatagaya after double parking their slay in front of a pet shop. Witnesses report that the front door of the pet shop was jimmied open by the Claus characters, who then spread bags of dry dog food in the entrance of the shop in order to allow the reindeer to feed.


2:10 am
After further calls of complaints, two officers dressed in drag (to hide their identity), were sent to Club HEAVYSICK to investigate the couple.


2:25 am
Upon entering the club, Thee Bat Officers report that the couple were performing some sort of ritual act in front of a crowd of pleased onlookers. The Claus couple were dispersing the gifts they had gathered from the numerous houses they had violated under the guise of being Mr. & Mrs. Claus. (see photo evidence taken by the officers)


2:55 am
The couple were arrested, handcuffed and spanked before being taken to police head quarters for questioning. NOTE: The reindeer and slay were impounded and are currently on route to Inokashira Zoo.


3:10 am
Upon further inquiry into the incidents, and after questioning, the Santa Love Doll character happens to be thee real Santa Claus. However, his sexily clad accomplice is not Mrs. Claus, but, one MIWA ROCK. Santa stated that he and Mrs. Claus have separated, and that due to the Eve of Xmas, he felt extremely lonely, had stopped off in Finland for a schnapps, ended up drinking a few too many, then arrived in Tokyo, where he crashed an office party, which is where he met MIWA ROCK, who had been hired to perform at the Xmas party. Following her performance, Santa and Ms. Rock went back to her dressing room where he began a game of costume play. The two were last seen flying away from the party in Santa's slay in a drunken manor.


3:45 am
Mrs. Claus has been notified of the incident and has agreed to carry out Santa's duties in the remaining hours of Xmas morning. Ms. Rock has been released as to avoid any further embarrassment to Mrs. Claus. Meanwhile, Santa is being held in Japan for further questioning and will be arraigned on the 27th for breaking and entering, contributing to the delinquency of minors, operating a slay under the influence and for representing Santa in a sexy indecent manor! 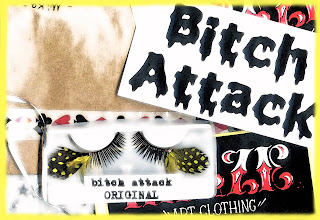 *All photos and content property of Jack Waldron (photos may not be used without written permission)
Posted by Detroit Jack at 8:56 AM