Order in ENGLISH HERE:
Beyond The Tracks:
Starring the Dare Devil Band is a full length 90 minute feature film by Detroit Jack, which will wisp you away on a journey through a Japanese period of mind, then and NOW!! 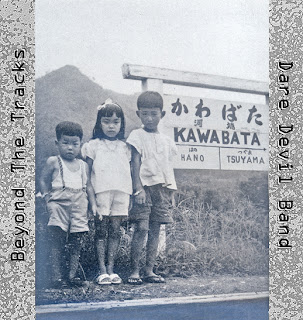 The Dare Devil Band is a hardcore improvised rock trio fronted by Shoji Hano, with guitarist Makoto Kawabata (Acid Mothers Temple) and bassist Atsushi Tsuyama (AMT).  The band name was taken from a 1992 Shoji Hano/Peter Brötzmann release titled "Dare Devil". Apparently the Hano/Brötzmann release was to be titled "Boar Warrior", but the translation to English was misinterpreted and the release name became "Dare Devil". Hano liked the name and used it for this trio.

Beyond The Tracks starring the Dare Devil Band is a full length movie running 90 mintutes, and features the band live at Super Deluxe in Tokyo on September 11th, 2003.  This amazing performance in sound and picture is melded into the exposed space created upon impact of the Atomic age, when the culture of Japan was left thinking as it glanced toward a retreating future commencing from ground zero Hiroshima.
Posted by Detroit Jack at 7:15 PM